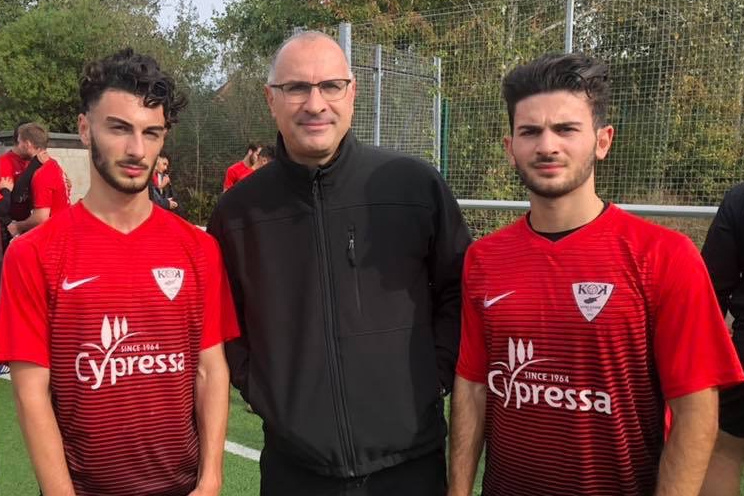 Where do I start!!

In 1987, the great man Savvas Savvides called me out of the blue (I didn’t know him at the time), when I was playing for Maronites FC to say -“I’ve been watching you this season, you’re a good player & I have researched your grandmother is from Komi, so you have to join PAOK FC!”

Whilst at PAOK FC won the Challenge Cup in 1988, there was a strong feeling from the Komi Association (driven by Savvas), that trophies were not the be all and end all and that more youth should be promoted into the team along with Cypriots who had a connection with the Komi Kebir the village & were ‘good people’, a key factor in Savva’s vision.

So, in the summer of 1989 Savvas led a name & personnel change from PAOK FC to Komi Kebir FC. The manager at the time and complete squad left to join another club!

It was just me left!! What now I said!

Savvas of course had a plan and asked me to be patient. Within days he had amassed brand new squad of players from other KOPA teams all with Komi links including brothers: Tom & Luke Toumazi; Vava & Louis Tsioupra; Chris & Tony Timotheou; Mario & Michael Michael.

The above were supplemented by another Komiti, Kyri Georgiou, an experienced KOPA player , friends of players like Gigs T and George Andreou plus a super crop of young players that Savvas had already been coaching at KOPA Youth level for PAOK FC including his son, Yianno, John Phillipou, Peter Koumis & our very own baby faced Nick Hanna.

The team was born – Chris Tim & Louis Tsioupra managed the first generation in 1989 followed by Tom Toumazi, John Calcott, Harry Christou all the way through to Nick Hanna until recently & now Mario Christou (Harrys son) & Andy Kyprianou who have also captained the club. As someone commented at a game last week – Komi are like Free Masons. Always sticking together- we’ll take that as a compliment we said!!

We all gelled like a family in those first 10yrs- we went on football tours to Yarmouth and Eastbourne, holidays skiing in Austria, to Cyprus and Kos and many short breaks in between. As you can imagine some of the stories are not printable!!!

Yes, we were a Yo-Yo team – too good for the 2nd division but not good enough to stay up in the 1st division but we didn’t do what other clubs did and chopped and changed our squads every summer- we went up together and down together. Komi FC were never ever a club to look for quick fixes, to bring outsiders in with mercenary players who don’t care or play for the badge.

We had players who could easily have played for top teams – Luke, Yianno, Nick, Tony T, but they wanted to be at Komi.

At our core was Savvas, a gentleman, a scholar of the game, showing us how to conduct ourselves at all times, telling us football was like Chess, to be smart on the pitch. Sportsmanship trophies awarded by KOPA came Komi’s way 3 times in first 5 seasons we were formed. He immensely proud of us in this respect.

We also played in the Islington Midweek league, we loved rushing to the 6pm kick offs and then Tom taking us to the local pubs where he taught us to take a lot of £1 coins (for the jugs!!) Once we were attacked by the supporters of a team from the local estate who didn’t like immigrants! Half the team ended up in Whittington Hospital A&E and Yianno was left with a nasty head injury. As always, we stuck together before, during and after the incident.

These were magical years and we became lifelong friends, best men to each other, god parents to each other’s children & still play 5 aside together every week, 30 years on. At a recent 50th birthday of Gigs our centre back, we had 17 ex Komi players in attendance out of 20 guests – that’s lasting friendship and I am sure today at the BBQ the majority of the team from 1989 will be in attendance.

Fast forward 30yrs and once again the emphasis is on youth blended with experience, with four 17yr olds have coming into the team from AEK Youth FC. My passion for coaching and running AEK Youth FC has directly been influenced by Savva’s inspiration.

Looking down Savvas would be so proud of the way the current Komi team, full of youth and experience – just like in 1989. The team has taken the KOPA 1st division by storm this season and has won many supporters for its ethos and style of play & is the envy of the KOPA league.

Remember the brothers I mentioned earlier in 1989 – well, Christopher and Con, brothers and my sons, played together for the team this season, which as you can imagine has filled me also with enormous pride. I’m sure my youngest son Stefano will follow them too!!

Tom’s son Gino, Nick’s son Louis have also played for Komi and I can’t wait for the day, the sons of Kyri, John, Kypros, Nick, Dino, Andy…..the list goes on, of former players sons, play for this great club.

To conclude, the late, great Savvas Savvides built the foundations of a lasting legacy, one which is still going strong 30yrs on.

It is also a great honour that Savvas family are joining us today and also Yianno, Savvas son, who has flown in from Cyprus to be here.